Lake Lucrino located in the homonymous hamlet of the municipality of Pozzuoli, a few steps from Lake Averno it is a body of brackish water surrounded by reeds and tall trees. The area is rich in thermal springs and accommodation facilities equipped with appropriate systems, both modern and from the Roman era. On the other side of the isthmus that divides the lake from the sea, there are numerous bathing establishments, some of which also have thermal springs.

Lucrino lake is a natural basin formed in ancient times as a result of the wave motion of the sea which, moving the sand over time, closed the natural inlet with an isthmus.

Subsequently, at the beginning of the ninth century, the whole area of ​​the Campi Flegrei suffered strong phenomena of bradyseism with consequent collapsing of the area, that made the lake disappear, completely submerged by the sea. The Lucrino remained submerged centuries and then gradually re-emerged with the rise of the subsoil. The troubled history of the lake does not end here, however, in fact after the terrible pyroclastic event of 1538, which also caused the formation of Monte Nuovo, Lake Lucrino already reduced in size by the previous bradyseism, it shrank considerably and it has still preserved that form. 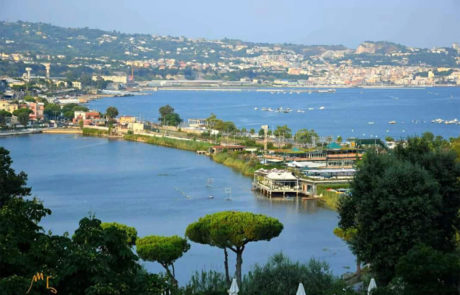 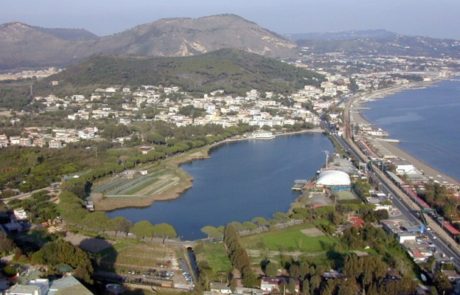 A testimony of the complete disappearance of the lake was that of Boccaccio, who in 1341 arrived in Naples at the court of King Robert of Anjou and, visiting the Phlegraean area, noticed that the rough sea was breaking into Lake Averno; therefore in the XIV century the Lucrino lake was still completely canceled by the bradyseismic submersion.

The name Lucrino derives from the Latin lucrum (profit or gain) for fish farms and especially oysters, which were installed by the Roman senator Sergio Orata around the year 90 BC. The lake was also a stage of noble and holiday life for the ancient Romans who built the holiday buildings and thermal parks. The thin isthmus that separates the lake of Lucrino from the sea, according to the myth, was attributed to Heracles who would have created it when from the remote west he brought the oxen he had stolen from the monstrous Geryon to Greece.

Lake Miseno is easily reachable from the Naples ring road by taking the Arco Felice - Pozzuoli exit, then continue following the signs for Lucrino.